NOW AVAILABLE IN LEATHER AND PAPERBACK

"There are over 450 English New Testament translations; all riddled with inaccuracies that never referenced the original Greek scriptures. The Pure Word research project was started to fix this problem." 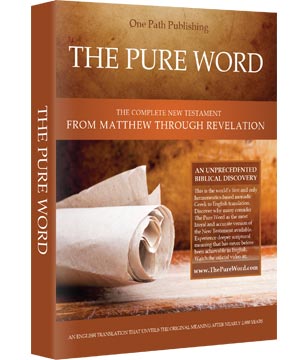 The Pure Word is an unprecedented New Testament resource, over 22-years in the making, that reveals the original Koine-Greek depths-of-meaning from the time of Christ using breakthroughs in monadic-based hermeneutics. Discover why many consider The Pure Word an invaluable tool to be used alongside your favorite version of the Bible to experience deeper scriptural meaning that has never before been achievable in English.
Order Now

"Dive deeper into your favorite version of the Bible than ever before!"

"I was in shock that so much depth was missing from the King James Bible."

"This Bible is a must have for anyone wishing to better understand God and the Bible without having to become a scholar in Biblical Greek."

"The Pure Word is an invaluable tool for truly understanding Gods instructions to His people. It is an eye opening and refreshing interpretation of the true words of our Heavenly Father."

"... awesome, breath-taking, taking you to a whole new spiritual realm of understanding."

"I read the KJV my whole life ... and The Pure Word is filled with the Spirit and brings me closer to God each day."

"This edition of the New Testament will open your eyes to the TRUTH! No more time consuming searching your Greek concordance for the true word meanings...it’s ALL right there in front of you!"

WHAT IS THE PURE WORD?

If you've been following Christian news sites or TV shows then you might have come across a new publicly released manuscript titled "The Pure Word" that has been lifting up the Christian community across America and around the world!
This 22-year long "last days" research project has accurately retranslated the New Testament scriptures from the of Textus Receptus Koine Greek that the KJV scribes used with life-changing results! By carefully identifying each word whose definitions have changed in the last 400 years and adding the thousands of Greek parsings missed by the KJV scholars the translation becomes deeply enriched and the clarification brings more life and meaning to each verse.
What also sets this English translation apart from all others is that the translation process additionally bypasses all interjections and misinterpretations resulting from cultural, personal, or political influences and opinions.
In fact, personal interjection within Bible translations is actually an issue that even affects the 1611 KJV as scholars were forced to omit and change scripture to comply with the King's guidelines. One such guideline was that they could not contradict the Bishop's Bible in the English translation even if the Original Greek said otherwise.
The Pure Word is NOT meant to replace your favorite version of the Bible, but rather to be used alongside it just as you would use a Strong's Dictionary, a concordance, or a commentary! Watch the official video now and see exactly how The Pure Word is an invaluable resource that should be used by every Christian, pastor, and Bible study group.
Comparing John 3:16
King James Version:
"For God so loved the world, that he gave his only begotten Son, that whosoever believeth in him should not perish, but have everlasting life."
The Pure Word:
"Because, God has Loved in such a manner the satan's world, so that He Gave His Son, the Only Begotten Risen Christ, in order that whoever is Continuously by his choice Committing for the Result and Purpose of Him, should not perish, but definitely should, by his choice, be Continuously Having Eternal Life."
In this example, both the KJV and The Pure Word present similar messages regarding the gift of Salvation through Jesus Christ; however, the original Koine Greek to English translation found in The Pure Word provides more original depth regarding the meaning of "believeth" in Greek that was condensed by the scholars who translated the 1611 King James.

One Path Publishing works with scholars all over the world that are engaged in new theological research with various archaeologists and researchers. More publications are in development that will unveil many of these new discoveries which are crucial during these volatile times. Sign up for our email to receive up-to-date news and announcements regarding ongoing research that could affect you and your loved ones. Your information is never shared and you can unsubscribe at any time.